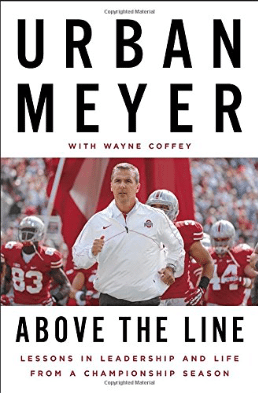 I recently (finally!) read Urban Meyer’s Above the Line. Loaded with great coaching lessons, the one that jumped out to me was the concept of the 10–80–10 Principle.
–
In a nutshell, any organization or team will be made up of:
The interesting concept here is that Meyer says he used to spend a lot of his energy trying to get the bottom 10%ers up to the middle. His realization is that this was not the best use of his time, as it rarely worked.
–
The best use of your time as the leader is to recruit your top 10%ers to target high-end 80%ers to bring them up to the top 10%.
–
He and Tim Tebow used to start their conversations with ‘What 80%er can we focus on today to move to the top 10%?’
–
I was having a conversation with a high-school track athlete this week, and he was relating how he and one other sprinter on his team had committed themselves this summer to outworking all of their competition and preparing to compete for the state championship in the 4×400.
–
His frustration was that the other members of the team were not committing themselves the same way.
–
I relayed this 10–80–10 concept to him. We discussed a change in approach – instead of trying to get the whole team on board, instead could he and his other teammate that was equally committed target 1 athlete that was in the 80% to try to bring up to the top 10% with them?
–
It is an interesting shift in paradigm. It reminds me of the Clifton Strengthfinders concept – instead of spending countless amounts of energy trying to bring your weaknesses up to a mediocre level, spend your energy taking your strengths to an even higher level. Your superpower.
–
Do you know who your high 80%ers are? Who is the low-hanging fruit that you and your top 10%ers can target to join the nucleus? Spend your energy growing your nucleus – grow your Superpower.